Hello person who stumbled across my art blog!
I'm headed off to Disney World soon and to Mickeys Not So Scary Halloween Party. As is tradition, Im starting my costume WAY too close to when it needs to be done. Then again, I wouldnt be me if I didnt flirt with deadlines so hard. Instead of being Merida for a 3rd year in a row, I decided I would go for a villain this time. That's right, the queen bee herself, Maleficent.
I thought it might be helpful for people to see how I make my costumes so I'm going to blog my adventure making Maleficent's summer costume: 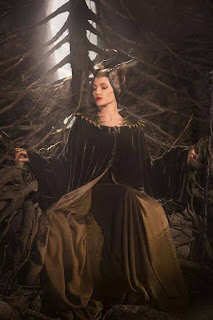 First thing's first: assemble supplies. I've had this costume idea in my head for quite some time so I spent months gathering bits for it. Maleficent is a fairy and so most of her costume is comprised of natural fibers and things you would find in nature like feathers, bones, sticks, etc. Lets get started.

For her cape, I already had a piece of silk velvet that matches the costume almost exactly -a really dark iridescent olive. Unfortunately, the piece was only a yard and finding an exact dye match was a challenge. I found what I needed in Silk Baron's Rainforest Silk Velvet.


The mock up I did requires at least 10 yd. At $32.50/yd, this was not going to be cheap but I couldnt find any alternatives that offered the drape and color. Luckily, when I was ready to buy, Silk Baron had a memorial day sale and I was able to pick up 10 yards for $26/yd. Golden Silks also carries a deep olive silk velvet that's only SLIGHTLY more cool toned and is about the same price. Ive ordered from both businesses before and had great experiences every time.

Next up, the lining
From what I can tell from movie stills, the lining is a sort of patterned silk chiffon or possibly georgette: 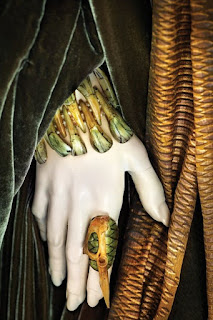 as it was possibly hand painted to resemble scales, I knew there was no way I had the patience to recreate it and I couldn't find anything similar online anywhere. The closest and cheapest (with coupons) I could find without sacrificing quality was an antique gold color of the polyester "silkessence" from JoAnns:

The gold/sunflower color was too yellow so this antique gold was the closest I could get without going brown. I might change it out later to a golden silk if I feel like spending HOURS painting on a scale pattern but for now it will do.

The bracelet/rings
I picked up the water buffalo teeth for the bracelet from Shipwreck Beads. They've been out of stock for a while now but Ive found plenty of Etsy sellers who can supply them. Just look for the kind with the holes pre drilled or buy extra if you plan on using a dremmel to do it yourself. Bone has a tendency to split.The bracelet elastic that holds them all together was found in the beading section of JoAnns/Michaels.
Later, these will be dyed gold and green and finished off with iridescence to mimic the labradorite that is her overall coloring scheme.
I'm sculpting the ring out of super sculpy and apoxie sculpt. I bought the sculpy at Michaels and the Apoxie Sculpt at TAP Plastics.

Now on to the feather collar.
The costume fabricators used a metal base for her collar but I need it to be as light as possible for travel so Im going the whole L200 foam sandwiched between 2 layers of Worbla route. There are lots of great tutorials on Worbla armor now and I picked up a large sheet of it through cosplay supplies. The material is very heat sensitive so make sure the weathers cool enough for shipping.
The L200 foam was on hand already from a previous costume years ago and so was the craft foam for use on the scale vertebrae bits.
I bought some dark elastic from Joanns which will be used to secure the collar to my shoulders. Any soft elastic should do though.
The costume department on the film used duck feathers for the collar dyed the same labradorite colors of blue, green and gold. I bought my natural duck feathers from a seller in Latvia and a seller in Pennsylvania on Ebay. I also bought a few packages from Michaels and used some existing turkey feathers from a previous costume. To dye the feathers, I used Jacquard acid dye in Chartreuse, Olive and Periwinkle from Dharma Trading. 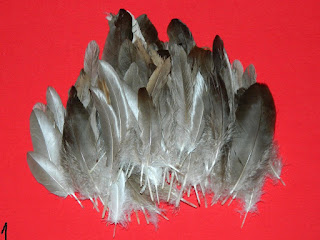 The costume department used fish scales for the vertebrate bits on the rear of the collar. As salmon skin leather shipped in from Iceland can get to be pretty pricey, I opted for a lambskin printed with the scale pattern for $15. I found the seller of this on ebay as well

The scale pattern is a little small for my liking and I had to burnish it with a little black leather dye but I couldn't beat the price.
The final piece to this puzzle are the jaw bones. According to a few magazine interviews, those little boney spikes sticking out from the collar are rabbit jaw bones. Etsy to the rescue again! I couldnt source any rabbit jaws in the size I needed but I knew rabbit and squirrel jaws were similar enough to work and I did find a seller on Etsy with over 40 jaw bones. That meant I didnt have to mold and cast any. Win! 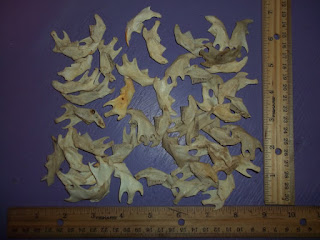 They were both around $20/ea with shipping only the full headdress by Disguise came in completely deformed. I read reviews that many others had this same problem. The rubber needed to be reshaped using a heat gun and the horns are on the small and thin side. The official Disney horns are really just extremely lightweight hollow foam horns with very visible seams but they are larger and have better texture so I'm combining the two with the magical help of a little electrical tape. The rubber horns are attached to the rubber headdress with a thin ring of adhesive so Im just switching the horns out.

The snakeskin used for the headdress in the movie was dyed Python but I wasn't about to spend over  $300 for snake skin and then have to go through trial and error of dying it. Instead, I found some lambskin leather on ebay that had been embossed with a python pattern and were being sold at a discount due to defects. I also purchased a yard of stretchy snakeskin printed embossed velour just in case the leather didnt work out. 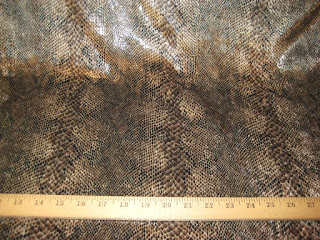 The staff
By far the easiest part of the costume. Sure, some cosplayers are out there making their own but aint nobody got time for that. Well, I certainly don't. AND I need it to be collapsible into my luggage. Disguise costumes it is! I bought 2 versions of the staff. The light up version ($25) and the one that doesn't ($20). The light up version is kinda flimsy but I DO love the light effect. The one that doesnt light up is pretty darn sturdy for plastic. I ordered a crow ($18) for the top as well. It was really hard to find one that was close to life size as possible for Diavul. The one I received looked more like a black pigeon than a raven, but its the best Im gonna get.

and both of these items are super light so that reduces luggage weight a lot. The raven is basically a foam core with feathers glued to it so Ill be using wire to affix it to the staff... or my shoulder.

The underdress
As I said before, aint nobody got time for nuthin. I would have made the simple brown dress for underneath. I mean, I have all the materials for it. However, I knew I wouldnt have the time so I ordered one from Thailand. What can I say? I know me. This is the ebay dress I ordered:
It was quite a bit darker in person but the cut is PERFECT for what I need it for. A breathable stretch silky jersey fabric is better than the thicker silk I had for it anyway.
For footwear, I couldn't exactly go barefoot and because we dont really see a shot of her feet in this costume, I'm at liberty to wear whatever Id like. I'm probably going to end up wearing my Earth boots though because they are super comfy and ergo friendly.

So that's it for the supplies. Ill be posting pictures of my process as I go along. The bulk of my time will be spent on the collar so I hope to have that done within the next day or two. Here goes nothin!
Posted by Amy at 12:39 AM